SNACK TIME!!!! This is one of our favorite parts of the day. You get to take a break and nosh on something yummy. Lately there's been a craze with potato chips and crackers where the packaging toughts that they are baked. This is supposed to be healthier so lots of popular brands are now available in a baked variety including Doritos and Cheetos. We think that's a little weird but we figured if they can bake up a batch of chips, they why couldn't we do the same? 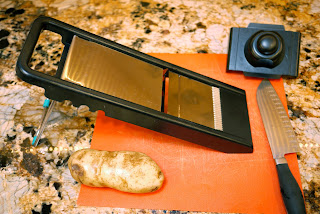 Well it's not that easy. After several attempts with different recipes, a trip to the vet and a sleepless night, we came up with the answer. We'll share the trials with you:
We found 2 recipes on foodnetwork.com and we're excited to try this because it didn't seem so hard to make up some "mountain style" chips with some simple and healthy ingredients.

What we ended up with a variety of potato "items", none of which were what we were aiming for. They ranged from thin mojo potatoes to inedible burnt crisps. It was sad. We tried thicker slices of potato. We tried lower oven temps. Each time we thought we were gonna get it right and each time it was dissapointing.

We had out last attempt in the oven when we looked down and saw that our neice puppy, Lilly had a huge (well, huge for her) lump on her leg. We didn't know what it was and our concern for her far outweighed our attempts at potatoes so we took them out of the oven and dealt with the major matter at hand. We'll try again another time.

Lilly is fine. She had a foxtail working its way out from her paw. She doesn't seem to be hurting but she will be in the cone of shame for 2 weeks. 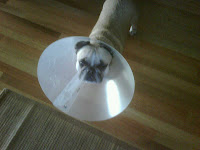 We did not try the potatoes again on Wednesday because we had a softball game. It was a fun game because it's a good group of people. The bad parts were that we lost and I (Erin) took a hard line drive to the thigh at the pitchers mound. I did pick it up and get him out at first but the resulting bruise kept me up all night. In that sleeplessness, I thought about potatoes and came up with something. We won't call it an epiphany but it is fair to call it a worthy idea. Potato excitement returned.
Sara left for Colorado to visit her pregnant bestie, Briana so the potato torch (Potatorch??) was carried on by me. The worthy idea consisted of fan folding aluminum foil and laying it on the baking sheet iso that there was less surface area touching the potato and more dehydrating warm air surrounding it.

This idea was in the test phase and so in order not to waste lots of Al foil, I used our very excellent toaster oven. Smaller area, less foil, less energy, it was a good plan.

Tim, my husband helped out since I had potato and oil all over my hands. He took some pics for us. He was soon fired in a scene that went like this:
click...clickclick...clickclickclickclick
Erin: Tim stop, that's too many!
clickclick...clickclicklclick
Erin: Tim, it's a baking blog not a fashion mag. I don't need you to be all "come on potato give me sexy eyes."
Tim: Well, that's no fun (puts camera down and walks away).
Erin: Thanks...
He did have a good idea though and one that makes a whole lot of sense. After cutting the potatoes, dab them dry with a paper towel. This helps them bake in the oil not their own potato juices. Potato juices are bad.
A potato is only gonna soak up so much oil, so we found that measuring it out was kind of pointless since we were never making as many chips as the foodnetwork.com recipes made. We were trying it out and failing. So when we sliced up as many chips as we wanted (then dried them), we just barely coated them with oil and pepper. We didn't need much more. Here's the recipe that we found worked for us: 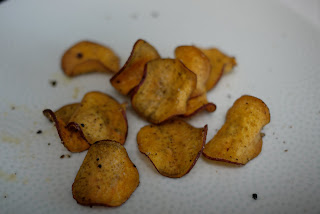 I cut the sweet potato in half and then sliced it to about 1/8 inch with a mandolin (this dish would be impossible without one).
Once I had as many chips as I wanted, I put them in a bowl, coated with olive oil and pepper. The sweet potato is not a wet as the russet and didn't need as much drying.
These were then placed on the fan foil lined baking sheet.
Since I used a toaster oven , I didn't preheat but would in mass quantities in a large oven. Also, I used the convection setting which I think was very insturmental in the drying, not burning of the chips.

Lessons learned: Try, try again. We knew we were on the right track and now we're happy to know that we can make healthy-ish potato chips that actually taste like potatoes and have no preservatives.
Also, maybe "Potatorch" should be a word. Thoughts?
Posted by Unknown at 8:10 AM

Email ThisBlogThis!Share to TwitterShare to FacebookShare to Pinterest
Labels: Snacks