DING DONG! Have you had those delicious silver covered hockey pucks made by Hostess? Don't know what we are talking about?  Click Here! 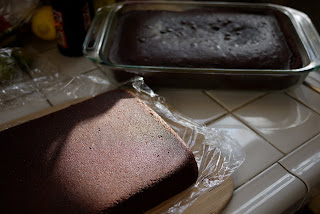 We play on a Co-Ed slow pitch softball team.  This isn't just any softball team.  We have been devoted members of Team Ryan Design for over 5 years now.  We are a very solid B division team but this year we were put in the A division.  So to say it nicely...  we didn't do very well.  So to celebrate our last game of the season aka the first round of playoffs, we made Ding Dongs.

We found a recipe on Smitten Kitchen, but she makes one big cake so we decided to use this recipe for a sheet cake.  From the sheet cake we cut circles using a biscuit cutter.  Erin decided to make a 2nd sheet cake because she didn't think we would have enough with one.  However, she didn't closely read the recipe and used baking soda instead of baking powder.  So, if you ever wanted to see the difference, here is a side by side comparison.  The cakes both tasted about the same though. 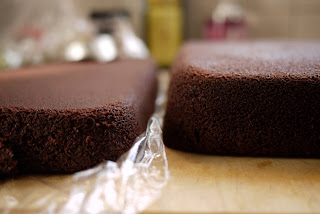 We cut each biscuit in half and filled with the recipe for 7 minute frosting. This stuff is very tasty. We don't know why we haven't made it before. We then went about melting some milk chocolate to cover them. This does not work the way it does at Willy Wonka's Chocolate Factory. It does not flow that well. We went back to the drawing board and tried a ganache. 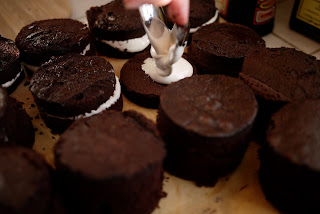 We didn't have time to let the chocolate fully set before the game so they didn't get wrapped up in foil.  But they turned out tasty anyways. It was a very warm night so even if the chocolate had set, it may have melted again anyway. We never saw them fully set and we'd like to. Someday... 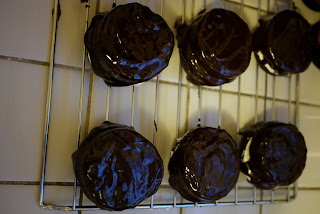 Lessons learned:  Baking powder is definitely not the same as baking soda.  Nothing really beats chocolate covered chocolate.  We are on the search for a hard setting easy pouring chocolate.
Posted by Erin and Sara Morris at 8:23 PM

Email ThisBlogThis!Share to TwitterShare to FacebookShare to Pinterest
Labels: chocolate