This month is Peach month and we've been feeling a desire to bake something with this in-season fruit. At first, we thought we'd make a cobbler but our research enticed us to go in a different direction. Last week, our local radio station KCRW (98.9 fm) was having it's Summer membership drive. We were planning on subscribing since we enjoy their programming and this led us to their blog for the show "Good Eats." There was a lot of frenzied instant messaging that consisted of "oooh look at this http://blogs.kcrw.com/goodfood/2010/08/nectarine-almond-crumble-pie/ " and "this looks great! http://blogs.kcrw.com/goodfood/2010/08/elberta-peach-galettes/ " We were very inspired. The fact that they have a pie-a-day post spoke directly to us. There are lots of great ideas and tricks from chefs and bakers all over LA and needless to say our baking excitement has been rekindled once again. It seems there aren't enough weeks left in the year to bake everything we want to for this blog. We'll have to come up with a solution for that.
The pie that we decided on was a Darjeeling Tea Peach Pie with Darjeeling Infused Ice Cream. We planned on doing both the pie and the ice cream. That is a lot of work so we knew we'd have to wait for the weekend for this one. We also didn't have much time for shopping and left that for Saturday as well.  Our friend, Annie was visiting from Australia and she was very gracious in tagging along as we pursued this endeavor.

We went to the farmer's market, Coffee Bean and Tea Leaf, a few other stops including a grocery store (redundant, yes) and came up with all of the ingredients except for the Darjeeling tea. We couldn't spend all day on this so an executive decision was made. We would substitute the Darjeeling tea with Earl Grey. We've heard of other people baking with Earl Grey and decided it was a good plan. Off to the kitchen.

We began with the dough and that went well. Then came time to prep the peaches, that didn't go so well. The Farmers Market is a great spot to get fresh, locally grown fruits and veggies. What you are not guaranteed is that said produce will be ripe. When we selected the peaches we were unaware of just how not ripe they were. These peaches were more the texture of apples and although they would be stewed before being baked, the recipe calls for ripe peaches and these were far from it. Back out we went.
On our way to Costco (because we had already been there this morning, saw lots of peaches and were hoping to not spend too much more than we already had), Annie asked us if we had any green grocers. We said that we don't have anything by that name but she explained that its a store that only sells produce. Mostly, we just have supermarkets but there is one place...and it was a true "Why didn't I think of that?" moment, even more embarassing that someone who isn't from around here, or even from this country thought of it; Marina Farms!! We probably didn't think of it because when we go there we want to buy a lot of fruit but we can't eat it fast enough. It's often too ripe and doesn't even last thorugh the week. We know, we know duh! We should have bought the fruit from there to begin with. We bought 7 peaches because these were much bigger and headed back to the kitchen.

Everything else went pretty smoothly. We tested the smell of an Earl Grey tea bag next to the freshly cut peaches and decided that this would definitely be something we want to eat, it was very exciting. We had a little too much fluid/too little corn starch in the finished pie filling but that didn't detract from the flavor.

The ice cream was great. We'd make both the pie and the ice cream again but we may have been more enamored with the frozen treat than the baked one...

Lessons learned: If you need your fruit to be ripe, buy it before the day you want to bake it, unless there's a Marina Farms near you. Also, spoon some of the fluid out of the filling. It doesn't need too much or it'll bubble over. 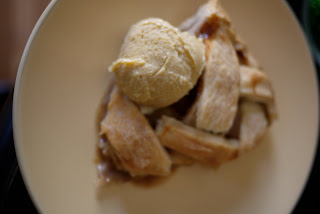