This post is very late because of the holidays. We've been so busy but here it is.
This week, we were gearing up for some major baking. We bought everything we needed to make gingerbread houses, cranberry cake, pumpkin cheesecakes, fudge and more because we were having a big party the next week.
We didn't want to get too crazy this week. We wanted to do something easy. We looked through the pantry to see what we had and we had everything we needed to make brownies. We've done brownies before though, so we went with a recipe that omits the chocolate, ups the brown sugar and you've got blondies. The recipe says you can put nuts, butterscotch chips or chocolate chips in there too but we went with dried cranberries because they're healthier, but also out of curiosity to see how they'd taste.
The recipe is found here at Simply Recipes. It's a great blog and I'm really surprised we haven't used it very much.

This may be one of the easiest if not the easiest recipe we've ever done.  Everything was mixed together.

We put it in a greased pan. Then into the oven. 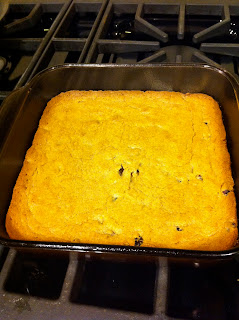 And then they were done. It's a quick and easy dessert or something simple to bring to a get together. Anyone can bake from scratch. This recipe is proof.

Lessons learned: Simple Recipes is a great site. We would use more cranberries next time and maybe even throw in some white chocolate chips. It's our new favorite combo.
Posted by Unknown at 8:47 AM No comments:

Email ThisBlogThis!Share to TwitterShare to FacebookShare to Pinterest
Labels: Easy

I(Sara) is self confessed Martha Stewart lover.  I have her Cookies and Cupcakes Books.  Since I received the Cookie one, I fell in love with the Stained Glass Cookies.

What is best about this is that you can use any sugar cookie recipe, but if you want here is hers.  Just use your favorite cookie cutters and cut out a window for the crushed candies to melt in while being baked.

We used a square cookie cutter that we had from our Valentine's Day Cookies and some smaller Christmas cookie cutters that fit inside.  We had a stocking, a tree and two slightly different stars. 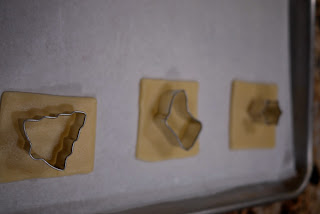 We used Jolly Ranchers to break up.  They melt smoothly and easily. We knew this from our childhood days of melting the Jolly Rancher sticks and wrapping them around a blow pop. Good stuff! We had cherry for red, blue raspberry for blue, and apple for green.
Our Dad said the red would have been better if it were cinnamon candy. We agreed then he put one red speck of candy at the top of the green Christmas tree. Guess we should have had yellow too... 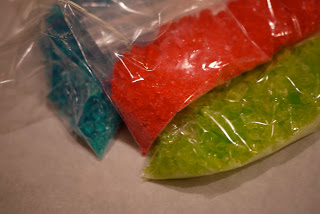 In our book it said to only put the candies in the middle of the space but it works much better if you fill up the whole section.  That way it spreads out evenly and you don't have to fight the candy to get it spread out. 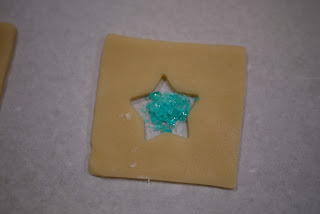 They came out really cute and tasty too. The candy was just thin enough to be able to bite into without a struggle. Perfect! 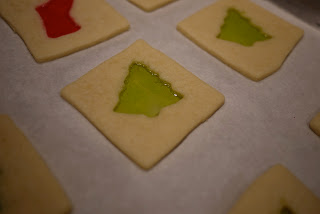 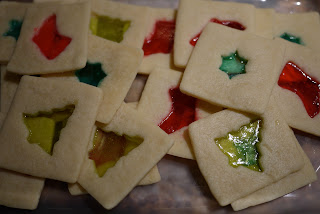 Lessons learned:  Sugar cookies are always good and they go well with the fruity flavors of Jolly Ranchers.  Will definitely have to apply the window effect to our gingerbread challenge.
Posted by Unknown at 6:36 PM No comments:

Erin and I are working on the same movie production and even for the same department.  We are however, on different sides of town.  There are a couple people that work in our department with dietary restrictions. Kristine, who we have known for a few years now,  does not eat dairy or gluten. She also tried to stay away from processed sugars but come on, it's her birthday! 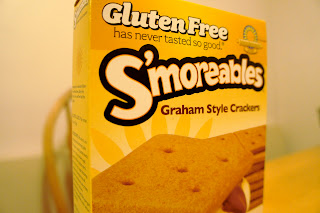 With a lot of people developing food allergies, there are more and more tasty foods and recipes available.  We decided to go with a Gluten Free, Dairy Free Cheesecake.  Dairy free cheesecake??  Yes it can be done, with Tofutti Better Than Cream Cheese.  Tofutti makes all kinds of dairy free products, we personally like the Tofutti Cuties ice cream sandwiches.  We also used Dairy Free Margarine and Gluten Free Graham Crackers.

Erin complied a few recipes. The gluten free graham cracker crust recipe came from about.com. It called for the Kinnikinnick brand graham crackers. Also, 1/2 cup of butter but since butter contains dairy, we chose the Earth Balance butter substitute. This was just the beginning of unfamiliar ingredients. The crackers looked like and felt like card board. After crumbling them up though, the consistency wasn't such a big deal. The butter though was a lot of oil. There probably should have been less of it for this use. 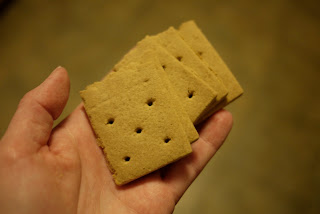 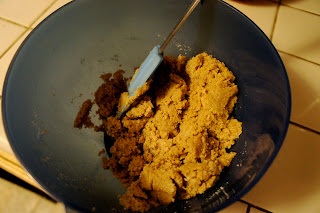 We baked the crust like you would a normal cheese cake and it came out not as stiff as regular crust would The vegan butter was a lot more moist that a regular crust mixture.  It came out looking like a cookie though. 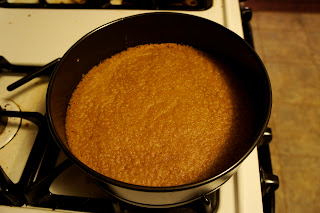 The filling looked exactly like regular cheese cake.  The recipe is from Vegweb. We adjusted this recipe as well since Kristine is not a vegan and we were just avoiding the dairy, we used real eggs. We added the raspberry puree like we did for the cheesecakes on Mother's Day. 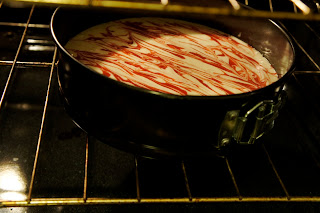 It seems that this recipe was for a regular pie pan and not a springform pan because the cheesecake mixture did not get anywhere close to filling the pan. We'll double it if there's a next time.﻿
So, it turned out that we own a cheap-o spring form pan. I believe it was purchased at Target many moons ago. A tip for baking cheesecakes is to use a water bath. We've never done this because it seems a bit excessive as we've always been happy with the way our cakes come out. We didn't do it this time and it was a good thing too as it would have destroyed the cake in our cheap-o pan that isn't liquid tight. We learned this as the excess oil leaked out of the pan and onto the bottom of our oven. Oops! 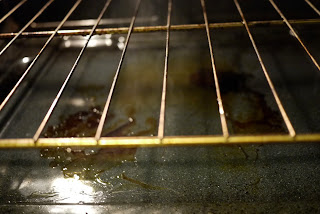 The crust ended up coming out a little bit hard, cracker like.  We are not sure if that has to do with the oils (or the leakage of it) or the lack of gluten. Kristine said she was very happy with it, so it was perfect for the occasion.

Everyone (regular foodies as well,) enjoyed the cheesecake. We were a bit surprised that everyone wanted to try it but even happier that everyone liked it. This is the only creation that Sara hasn't been able to taste because it was all gone. 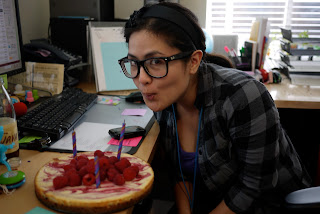 Lessons learned:  Dairy free cheesecake is pretty tasty.  We'll use a pan under all pies and treats that call for a lot of oil or fluids.  Raspberries are always a yummy addition, and double this recipe if you have a spring form pan.
Posted by Unknown at 7:02 PM No comments:

Sorry for the late posting....things have been busy with life and stuff.  You know how it goes.

We decided to make Quiche this week because we haven't really done one like a traditional quiche. We think that the sausage potato one doesn't really count.
In deciding which quiche to make, Sara found a recipe that called for Swiss Chard and that was perfect for us because we have that growing in the yard.  Erin not only has been working on her baking this year, she also learned harmonica and has been growing herbs and greens in our garden. 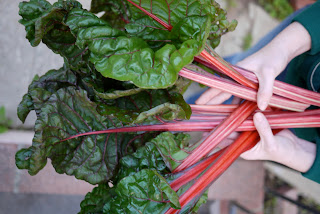 As you can see her green thumb has paid off. We just will forget about the pumpkin, just look at these beautiful greens.

This a healthier quiche recipe from the website called Whole Living which is linked to Martha's site.  I know I know Martha again??!??!  Well to be honest....  She hires great people and gives good advice. She's a great place to learn from for amateur bakers like us. 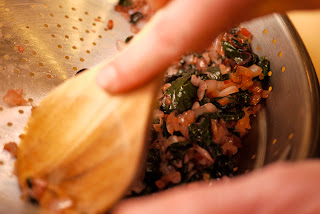 As I(Sara) added the cooked greens to the flour mixture and then pressed it into the pan I wasn't sure how the whole thing would stay together.  I guess healthier means no extra butter...  Bummer. 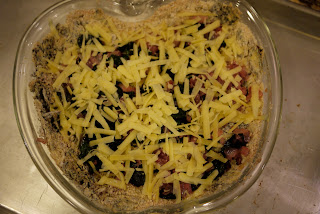 There was however, a good amount of cheese. Now, Gruyere doesn't smell too fantastic and we'd never heard of a chard quiche before. We were a little worried that we were headed for another failure. 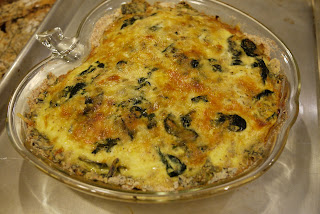 Once it was all cooked up, the greens and the eggs smelled yummy.  What was even better, they tasted great!  We would definitely use this recipe again. It really was so good!

Lessons learned: No butter doesn't necessarily mean bad.  Homegrown food is pretty awesome(but we probably all knew that already).
Posted by Unknown at 7:30 AM No comments: