Today, we are celebrating our friend Candice's birthday. Candice does not eat many sweets. She's a very healthy lady. She works out and eats right so when she asked us to bake Cinnamon Cupcakes, we knew it had to be good.

Sara went to work researching a recipe and found a great starting point at the blog for Pink Parsley Catering. The funny thing is that when you consider where this recipe came from, this was not the start. Behold the great mystery of blogging: it's like the game telephone. Pink Parsley changed up the recipe from Annie's Eats, who got it from Southern Grace who took it off of Epicurious. They all made their changes along the way and so of course we changed it up a little too. :o) We'll spare you the details of what changes were made when but you can track them yourself with the links above if you are so inclined.

Years and years ago, Sara got the idea that we should have a pumpkin cheesecake for Thanksgiving. Back then, Erin was the only one who baked so she took up the task. The recipe was from the Nestle website Very Best Baking. The spring form pan that was available was too small to hold all of the batter so little pumpkin cheesecakes were made with the rest. The little ones get baked for about 20 minutes and from there a tradition was born.  Friends and family beg for this sweet every year, most vocal of whom is probably Candice. These will most likely be made again this year in the Fall but not for the purposes of this blog as one of the rules is to not make something we've made before.

Candice wants these cheesecakes year round but she knows that Erin will only make them in the Fall but that's probably a good thing. Since it is her birthday though, we decided to make the frosting in the vein of her favorite sweet and went with the Pumpkin Frosting found on the Pink Parsley site. It's very similar to the frosting we used for Oliver's Cupcakes which Candice loved so it'll be the perfect treat for her if she doesn't explode from excitement.

The oven was preheated to 350. We sifted the flour, cinnamon, nutmeg, baking powder, and salt together (this part smells so good!) The butter was melted and combined with the milk. These mixtures were both set aside.
We used the standing mixer to cream the sugar and eggs together, then added the vanilla. The flour was mixed in like we've learned to, a little at a time. Then we mixed in the milk and butter.
The cupcake liner were filled 3/4 full (or maybe a little less, there could have been more.) Then baked for 15 minutes. That's all it took.

We wanted to do the frosting in the morning so that it would be freshest. Again, this is Candice's Birthday and she doesn't normally eat sweets. We try to make it so that everything we bake is so good that it's worth the calories but never more so than today. So, we woke up at 5 to take the butter and cream cheese out of the fridge then went back to bed for an hour. The frosting goes like this:
6oz of Cream Cheese (or 3/4 of a package)
1/2 Cup(1 stick) of Butter
4 Cups of Powdered Sugar
2 tbspn Pumpkin
1 tspn Vanilla
1 tspn Cinnamon

Cream the butter, cream cheese and pumpkin together until light and fluffy. Add the vanilla and cinnamon, then slowly add and mix together the sugar. Easy! And wow, it's really good!

So there they are, Cinnamon Cupcakes with Pumpkin Frosting. They are quite delicious. Happy Birthday Candice! We hope you have a great one! 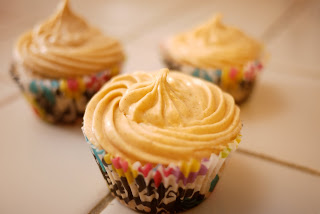 Lessons learned: These are really yummy! We might try to fill the cups a little more next time. There's nothing wrong with 22 cupcakes or 20 cupcakes. They don't have to be in dozens.
Posted by Unknown at 7:43 AM