This week, our parents were hosts to two families from Germany. On Sunday, we had a big BBQ and we thought it would be fun if they showed us how to bake something from Germany. Monika and Anya chose to make Zwiebelkuchen which literally translated means Onion Cake.

This is more savory than sweet so we made it as an appetizer to the meal. It is traditionally served in the fall in the wine making regions of Germany and it is enjoyed with a "fresh young wine", we chose Riesling as partially fermented wine was not readily available to us.

As you might guess, we did have a few translation problems. A few of the ingredients are not sold here in the way that they are in Germany or they're just different. The flour for example is not the same. Theirs is less processed and we could have gone on a hunt for something closer to traditional but the point of this dish, we were reminded is that it should be easy and enjoyable. We used regular unbleached all-purpose.

The next obstacle was the measurements. They use milliliters, we use cups. They measure weight, we measure volume. They use Celsius, we use Fahrenheit. One thing we had in common though was that we would not be deterred.

We pulled out the flour and Monika asked for a scale. We know that some bakers use a scale for accuracy but we aren't those kinds of bakers so we had to eyeball it. Monika has some culinary experience working in a hotel kitchen and was very familiar with how the dough should look and feel as it is getting close to the end of the kneading process. She said that when the dough is no longer sticking to the sides of the bowl or your hands, it's done. It should still be moist but not sticky. If there's too much liquid, add more flour, but make sure the existing flour is already well mixed. Sometimes, you just need a little more kneading. We have a better idea now of how much of each ingredient as you'll see in the recipe below. There was a lot of trial in this baking process but thankfully for Monika and Anya's vast experience, not too much error. The dough was set aside to rise and we moved on.

The next step was the onions. Lots and lots of onions (5 large ones!) Monika was superb at chopping them up but there's only so much someone can take. This isn't a sad post but there were lots of tears in the kitchen on Sunday. They don't have to be finely chopped because they get sauteed later and broken down some more in that process. In Germany, they call them "Vegetable Onions." These are the large onions that are not very potent. We should have refrigerated them to help diminish the sting but it was too late by the time we thought of it.

The onions were sauteed with a whole package of cut up bacon (we were making 2 cakes) and a little bit of oil. Then there's a cream mixture with eggs and sour cream. The last ingredient for this part is some Caraway seeds. We ran them through a spice grinder to increase the potency with the added bonus of decreasing the likelihood that they'll get stuck in your teeth. This spice also aids in digestion. Some people don't like the taste though so we made one cake with it and one without. We liked it but it wasn't bad without it.
The onion/bacon/caraway mixture gets spread over the dough and then the egg/sour cream mixture get poured evenly over that.

Then it's time for the baking. In Germany, it gets baked at 200 degress celsius so on an American oven, that translates to 390 fahrenheit. It's an umfamiliar temperature for us but after rotating halfway through and baking for 20 minutes, we couldn't argue with the results. 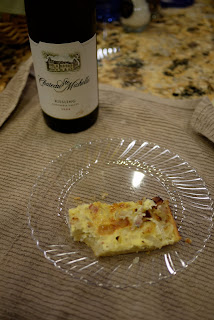 Spread the dough in a baking pan. Lay the onion mixture over top then pour the cream mixture in evenly.
Bake at 390 degrees Fahrenheit for 20-30 minutes depending on how crusty you want the top to be.

Lessons learned: We learned a lot this week about some German culture and some more about dough making. We are so grateful to Monika and Anya for showing us this dish and doing most of the work. We are excited to try it again on our own. We had a lot of fun with this.
Posted by Erin and Sara Morris at 8:26 AM