When I(Sara) think of summer, I think of sand and the beach.  I thought we should make something resembling that and Pecan Sandies, because they have sand in their name I guess, popped into my head.  I remember eating the Keebler Pecan Sandies growing up. 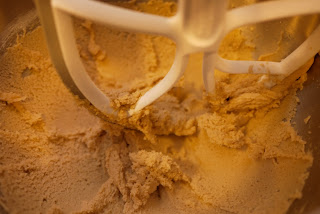 So we googled away and found various recipes for "Pecan Sandies."  Most of these recipes are short bread based(including the Keebler one), which requires anywhere from an half an hour to three hours of dough chilling time.  Since this time we were baking on a school night, we didn't have that kind of chilling time.  We found a recipe on Martha's website for a quick batch of Pecan Sandies. 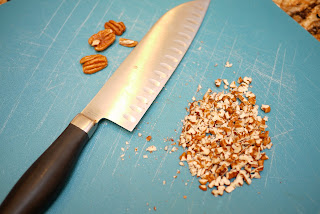 With only 6 ingredients, this recipe came together really quickly.  I kept thinking "are we getting better at baking or is this just a really easy recipe?"  I think it is a bit of both.  I did realize that "coarsely chopped" means a once through with the knife rather than what is pictured above. 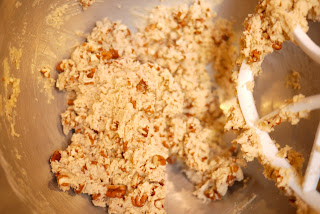 One of the best parts about this batter is, there is no egg in it and that means you can eat away!  I don't think there is much that tastes much better than flour, sugar, butter and vanilla. 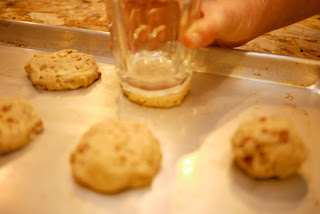 Once the dough is rolled into balls, you squish them.  I think that ours were a bit on the large size so we didn't end up with 18 cookies as the recipe says.  However, they were tasty.  Our dad reviewed them as "Not Bad" and had a hard time coming up with an improvement other than "they could use a bit more salt." 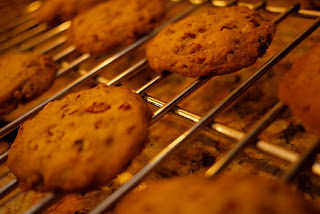 Although these didn't quite taste like the Keebler ones that we remember, this was a really simple and quick recipe that is worth making.  I think we might have to take the time to make the shortbread ones one of these days.

Lessons learned: Homemade baking from scratch is always worth it. This is a good cookie base.  Maybe next time we try with some other ingredients, butterscotch perhaps?  Chop the pecans bigger.
Posted by Unknown at 1:49 PM