April 26th is Pretzel Day! Ok, so maybe we like to celebrate stuff ok? Not everyday is a holiday but we like to bake and it's a way to celebrate.
Trader Joes used to sell these pretzels that had sunflower seeds in them and they were YUM! They were a great snack food for kids (camp counselor tested) and it was a tragedy when they stopped selling them. They said that not enough people were buying them but we (plus a whole lot of people we know) would have bought a pallet of them if that meant that they'd still be around today.
We decided to take matters into our own hands and are making some sunflower seed pretzels now. Alton Brown's hard preztel recipe seemed promising so we went with that but added sunflower seeds. So the ingredients list is:

We have to admit that it seemed pretty scary when the recipe called for dropping the pretzel dough in boiling water and then remove them and place on sheet pans. Sounds so simple, but in practice, it was a little more than that.

We used forks to get them out and there were a few that fell apart. The recipe calls for them to be 14"-15" and we're not so sure how to execute that. Ours were much shorter. What tools would you use to get a 14"-15" noodle out of boiling water and keep it straight?

It wasn't so bad but again, ours were shorter. Then, they were brushed with the egg mixture and salted.

Then into the oven for 60 minutes!

They didn't come out the way Alton's looked but the were hard and salty. They looked more like bread sticks but they had the nutty flavor that we were looking for from the sunflower seeds. They were a little soft in the middle but overall, quite enjoyable. 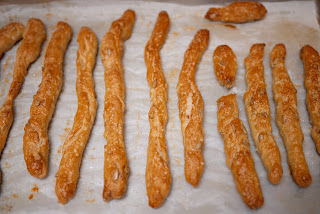 Lessons learned: If we were to try this again, we might be more diligent about making them skinnier to see if they'd be darker and crunchier. But, they tasted this way too.
Posted by Unknown at 8:07 PM

Email ThisBlogThis!Share to TwitterShare to FacebookShare to Pinterest
Labels: Pretzel