So, today is Earth Day and we made brownies for it. Sorry this post is a bit late in the day, but work got in the way, the weather wasn't cooperating and we aren't thrilled to share with you that our plan didn't work out so well.

For this occasion (which happens to be the 40th Anniversary of the holiday BTW), we decided that there wasn't anything more environmentally friendly than baking with a solar oven. No, we don't have a new exciting recipe to share, and it's kind of nerdy but what do you expect from a blog called "2010: A Bake Odyssey?"

We started building the oven late last week. We used 2 cardboard boxes, one smaller than the other and put Styrofoam between them to provide some insulation. 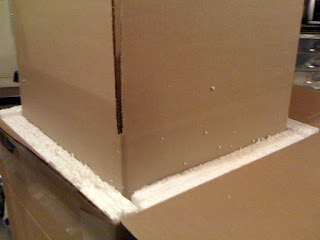 We used another sheet of cardboard lined with aluminum foil to provide some reflection. We obtained a piece of glass from a garage sale and put it over the oven for a "greenhouse effect". When testing it out on Saturday afternoon, we reached a temperature of 150 degrees Fahrenheit. 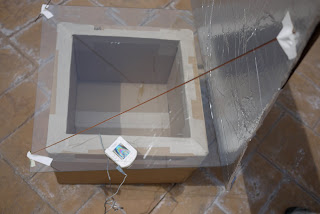 We hoped for better and went and bought black poster board to line the inside of the oven and draw in more heat. In the spirit of the project, everything but the poster board and the foil was previously used.
The next day, in a test at about noon, the oven got up to 227 degrees F. Then we dawdled for a little bit and didn't get the brownies in there till about 2. 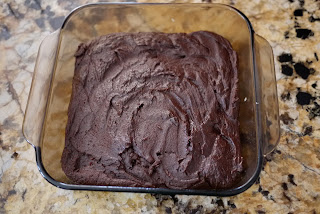 (This isn't what they looked like when they were done but pretty close. Imagine them with a tan.) 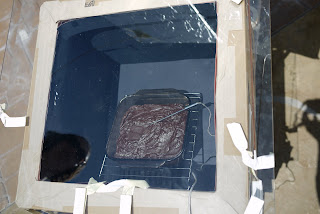 It was still pretty sunny with a few clouds. The oven got up to 202 degrees F and the brownies themselves were heated up to 161 degrees before the clouds rolled in and the temperature dropped rapidly. 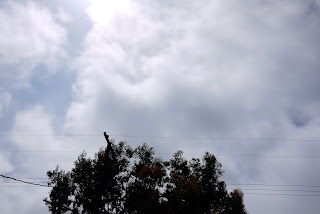 (Booooooooo!)
They were only in there for a little over an hour. According to the FDA, eggs are satisfactorily edible if cooked to 145 degrees for 15 seconds. We reached that but we didn't achieve brownies. They were not even close to cooked through. We had to finish them in the real oven and that defeated the whole purpose. We were disappointed, especially since it's been gloomy and/or rainy for the last three days. We didn't even have a chance to redeem it. Well, we haven't given up anyway. We believe that this is possible and we are gonna make it happen.  We'll update this post with the next attempt and hopefully success. Till then, be green and Happy Earth Day!
Posted by Erin and Sara Morris at 6:51 PM

Email ThisBlogThis!Share to TwitterShare to FacebookShare to Pinterest
Labels: Brownies