Lasagna.  Who doesn’t like lasagna?  It feeds a group, its filling, and its tasty. And people have been asking us to find a great recipe for it so, here it is folks! 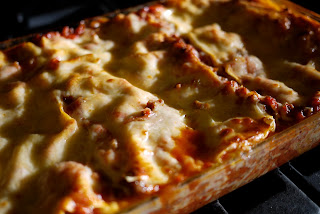 Reading the recipes for lasagna made it seem like this was going to be a long process but we thought it couldn’t possibly take as long as it takes to make a frozen lasagna.  This recipe is more cooking and less baking than a cake or such because there is less chemistry going on, but that allowed us to manipulate the ingredients some and kick up the flavor(more crushed red pepper please).

A lot of recipes called for ground beef and ground pork (or even meatloaf mix) but we liked the idea of sausage so we did a combo of recipes from Cooks Illustrated to make both the sauce and cheese mixture.

Plus you will need 1lb of mozzarella and another 1/4 cup of parmesan for the assembly of this luxurious lasagna.

Preheat to 375. Hint: Put a baking sheet on the middle rack so they juices don't leak into the oven like ours did.

The sauce was made first because it takes a good 25 minutes of simmering to get it thick enough.  We were very focused on that, so much so that we forgot to add the sausage. But thankfully this is cooking and so there was some room for error. If we made a cake and forgot the flour, we would have had to start all over. This time, we just browned the meat (with olive oil) and then added it to the sauce. :o)

The onion was softened in the olive oil with the salt in a medium saucepan over medium heat. The garlic was added to the onions and cooked till fragrant (about 30 secs). Then pour in the tomatoes and spices. Then in our case, add the meat ha ha. Don't try this at home, I mean I guess you could but it would be best to brown the meat first with the onions. Simmer until thickened (about 25 minutes) but make sure there's still juice enough to cook the noodles. 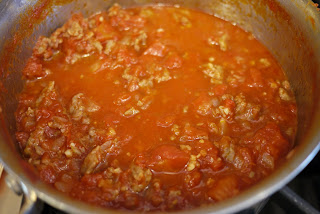 The cheese mixture is pretty easy to whip up after chopping the basil. You just mix it all together. Mmmm cheesy! 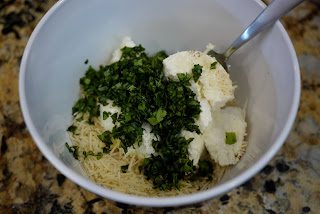 So here's what we were talking about in the assembly. Here's a pic of how we layered it: 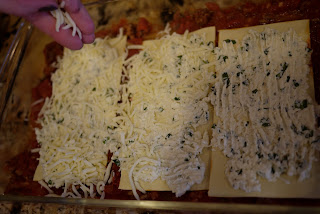 Spray a piece of aluminum foil with cooking spray and tightly cover the lasagna. And now, for the baking part: put it in the oven.
After 15 minutes, take the foil off. After about another 25 minutes, it'll be ready when the cheese has browned a little and the sauce is simmering.

Allow the lasagna to cool before serving.  It serves about 6 - 8 people. ENJOY! 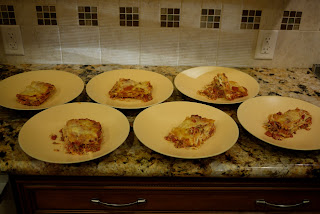 Lesson learned:  When cooking, it can usually be fixed.  Homemade lasagna doesn't take anywhere as long as frozen store bought and it is oh so yum!
Posted by Unknown at 7:07 PM

Email ThisBlogThis!Share to TwitterShare to FacebookShare to Pinterest
Labels: Dinner