Update: Our Glee Cupcakes were named #2 on the "20 Most Inventive Cupcakes Known to Man" by koldcast.tv Also, due to the response and requests to make these cuties, there's another update further below to help explain the process.

We are Gleeks and we are proud of it. We are fans of Glee and enjoy every second of it. Glee returns today and we couldn't be more excited. To celebrate its return, we are dedicating a Post to it. We present to you: Glee Cupcakes. 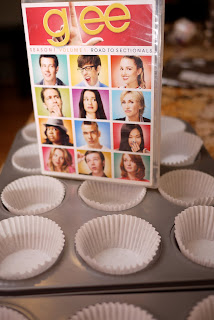 On the show, the Glee kids are considered unpopular and targets for teasing. The main attack is what is called a slushie facial. The football players throw slushies in the faces of the poor Glee Club students. So, not that we condone this sort of behavior but our cupcakes are meant to look like the slushies. We even watched the episodes closely to see that they are called "Big Quench" as opposed to "Big Gulp".
We've been planning this for months. The cupcake challenge was involved too. As has been said before, we do not believe in looks over flavor. We could not let the presentation be better than the taste.  The cupcake challenge yielded a chocolate cupcake as the winner. That doesn't work so well for a slushie cupcake. The vanilla cupcake came in last place at the challenge but we liked it. We did some research, made some improvements and went for it.  Our recipe was a combination of the amended Magnolia Bakery recipe from Cast Sugar and the highly praised one from 52cupcakes.blogspot.com. We went with the following ingredients:
1 3/4 cups cake flour
1 1/4 cups unbleached all purpose flour
2 cups sugar
1 tbspn baking powder
3/4 tspn salt
1 cup unsalted butter
4 eggs
1 cup yogurt
2 tspn vanilla extract
Then we followed the steps on the 52 Cupcakes site. 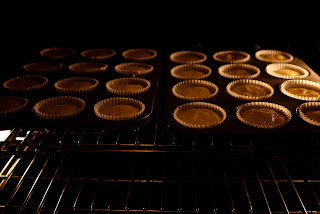 The decoration was the next big step for us. We made the frosting and then split it into 3 bowls. We planned on dyeing one blue, one red, and one purple to match typical slushie flavors.

Then we topped them with colored sanding sugar in the same color.

UPDATE (more details): Then they went into the cups.
Here's a link to a search for the cups. Go for the $3.19 ones.

We cut down 9oz plastic cups to the point where the cupcakes don't slide into the cup anymore. Then we wrapped the labels that we made around the cups and tucked the ends into the cup.

We have to say they came out super cute!! 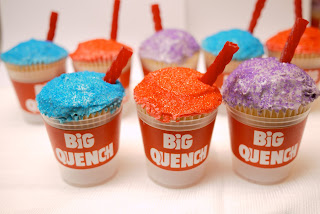 Happy return of Glee, everybody!

Lessons learned: We don't use as much frosting as most recipes call for, we ended up with A LOT left over. Cake flour is great for cupcakes, we ended up with a nice soft texture that we were aiming for.
Posted by Erin and Sara Morris at 10:35 PM