Ladies and Gentlemen, we'd like to proudly present our first of the Quarterly challenges. Mostly it's a competition in recipe choice because we just can't help but assist each other but it's a bigger baking endeavor than our usual weekly posts. 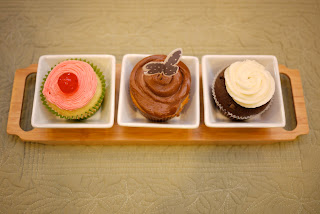 This time we chose Cupcakes. Those omnipresent little pastries that seem to gain in popularity no matter how many bakeries specializing in them pop up. Sara maintains a strong fondness for them though I struggle to understand their appeal. I can't help it, I'm a cookie girl.
The rules:
As usual, they had to be made from scratch.
We were allowed to make 24 cupcakes and present 12 for competition.
There were 8 non-biased judges to decide the winner based on overall enjoyment.
The winner gets to write the post and pick the flavor of cupcake in a future post (you'll see).
The contenders:
Sara made a beautiful Cherry Limeade Cupcake with a lime cupcake infused with juice and cherry frosting.
I made a chocolate cupcake with Vanilla frosting. Sounds boring but the secret ingredient was...mayonnaise. Sounds even worse now but you'll hear more later.
The third entry was a collaborative effort between the 2 of us: a vanilla cupcake recipe from Magnolia Bakery (famous in NYC) with Dark Chocolate frosting.
The results:
The third sounds like the second just opposite but we wanted to make a different kind of frosting and the vanilla cupcake recipe sounded so great to us. When we tasted it, Sara thought it tasted like a sprinkles cupcake. It came in third... 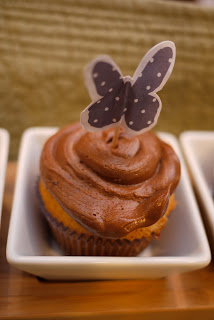 Second place went to the Cherry Limeade cupcake that Sara made. Although most judges remarked that the look of the cupcake was most appealing and moistest, they went for a more classic flavor. 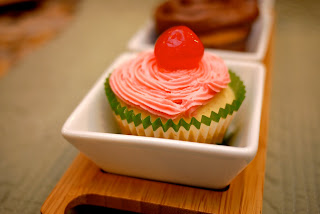 The winner was the Chocolate Mayo Cake. To be fair, the judges were not told what they were tasting when they tasted them. They felt tricked when the truth was revealed. A couple proclaimed a hatred for Mayonnaise but they couldn't taste is because they voted for it anyway. 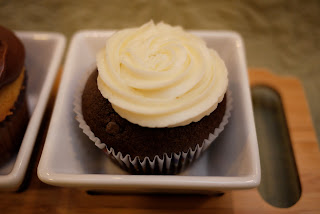 To be honest, I'm not a big fan of mayonnaise either. In fact, it was the only ingredient on the recipe list that I didn't already have.  I had heard about it from a friend who had cupcakes at her wedding and her guests went crazy over the Mayo cake. I thought it was an interesting idea and did some research.
The problem with a lot of online recipe reviews is that most people exclaim about how excited they are to try it or how yummy it looks. There are very few about how it actually came out for people. A lot of people made comments about how Mayo Cake was something their mom used to make. Not our Mom. And not anyone I know's mom either. I took from this that the use of mayonnaise is an old fashioned technique and grew even more intrigued.
The recipes that I found on Food Geeks and Pastry Wiz except the latter served about a third more and the measurements were about a third more. I took this to mean that this may be a popular recipe and the one to try.  The recipe on the Food Network Site however was different. It called for Buttermilk which we have discovered we aren't big fans of so I disqualified it. I did see however that they used more cocoa and one reviewer noted that the cake wasn't chocolatey enough and would add mini morsels the next time. I decided to try that since my chosen recipe had less cocoa.
It all went fine. I had my doubts while mixing in the mayo. It looked gross, it smelled gross. 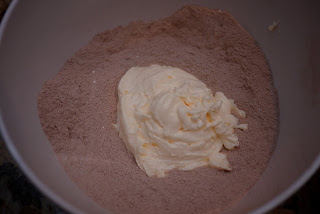 But there was hope to be found with the vanilla extract and water. 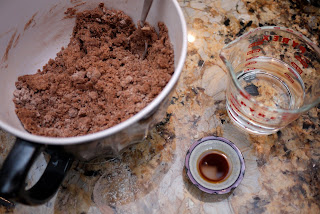 Then it started smelling and looking like cake. I added the morsels to all but one cupcake just to see and boy did that ever save it! 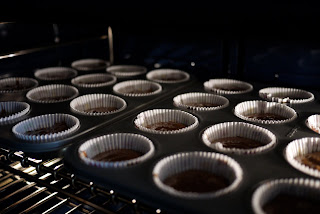 The came out beautifully and I frosted them with from scratch vanilla frosting. Perfect! 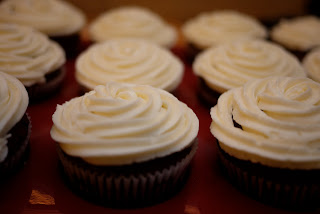