Last weekend we went to a birthday party in Seattle. Our cousin George is turning 70 and for such a momentous occasion, there were cupcakes! The mini cupcakes shown above are from Trophy Cupcakes and we fell immediately in love with the Salted Caramel ones. They're the ones with with the caramel drizzled on top. There were lots of dimensions of flavor, multitudes of deliciousness and those puppies went fast!
Then, one night last week during a bit of insomnia, Sara was looking through the Martha Stewart Cupcakes book and found...Chocolate Salted-Caramel Mini Cupcakes! This is a great book and many of the recipes can be found at marthastewart.com. This one isn't there but it's easily found online as lots of food bloggers have done it. There's even a Martha Stewart Cupcakes baking club. Here's how ours went. 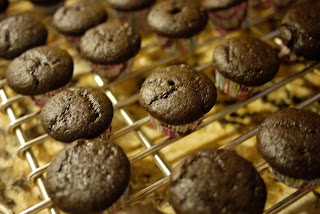 The cakes were easy enough. We've never made mini ones before but there's a first time for everything. We had to buy new pans and get the smaller paper liners. We do believe there is an appeal to smaller cupcakes though. They're pretty high on the cute scale. Then we took them and stabbed them with a knife and ripped out their insides. Well, made room for caramel is more like it. It was a great start but then on to the hard part.

Another first for us with this recipe was homemade caramel. The Martha Stewart book said to use a candy thermometer. We didn't have one of those so we consulted Joy the Baker's blog. There's a video there on how to make the caramel. It was very helpful.

First, we had to take the water, sugar, and cornstarch and get it boiling. It all melts down and we had to be brave and let it go. No stirring after it gets boiling. It should keep boiling for about 10 minutes or until it gets brown and nutty in aroma.

We could have probably let it get a little darker but it was still tasty. We'll try it next time. Next step, add the cream. You thought we were wimps for being scared to burn sugar, you should have seen us when the cream went in.

We had to pour it in slowly because it all just boils up in the pot. We missed the best picture moment but you can get an idea here of what it did. It was very exciting! Then it gets some salt added and it all goes into the cakes. Lots and lots of cakes. 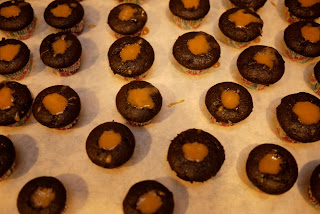 These got topped with a little bit of sea salt and then frosting went on top of that. The frosting recipe was a little rich. It called for a whole pound of melted semi-sweet chocolate. We also had a lot leftover because the recipe makes over 50 mini cupcakes and we threw in the towel at 36 which we thought was quite respectable.  They came out pretty gorgeous if we do say so ourselves. 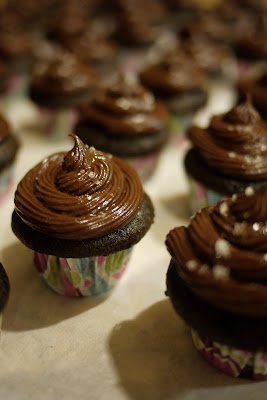 As you can see, the tops get a little more salt. The salt draws out another dimension of flavor in the caramel but we felt it was a little too much salt. We'd scale it back next time. A lot of the time, you can end up with something pretty terrific that's homemade, better than from a store or bakery but in this attempt, we stick with Trophy Cupcakes. Now, if only we lived near Seattle...

Lessons learned: For next time, reduce salt, extend caramelizing time.  We also had a snafu with the quantity. These cupcakes are to be consumed within a day of making. Normally, we can rely on Sara's co-workers to enjoy the treats. Though some of them absolutely loved these cakes, a majority of the treats went untouched. We believe that we have reached the tipping point of goodies overload. It's not bad for 6 months in and a good thing that Erin starts a new job next week. :o)
Posted by Unknown at 12:26 PM