MMM MMM MMM Now who doesn't like breakfast?  Especially when someone else makes it for ya. 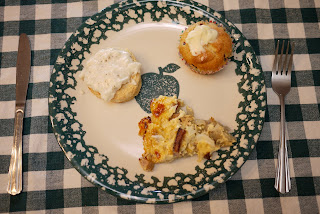 We started a tradition last year of heading up to our house in Northern California for a family get together on the 4th of July weekend of riding motorcycles, BBQ, fishing and just visiting.  We thought this would be a perfect occasion to make a massive breakfast and have enough people to eat and judge.  All in all that morning there were 11 of us sitting around the table.  Being that is isn't our normal house, a few supplies were needed to make the food which (most excitingly) included a new oven.

I(Sara) chose to make Paula Dean's Biscuits with Milk Gravy.  The recipe seemed simple enough and with bacon grease in the gravy, I thought for sure it would be a winner.  The ingredients go together fast but when I turned the dough out to knead, it didn't seem to all want to stick together so I added a couple of tablespoons of water.

I guess this should have been an indication of the dough needing a bit more fat to increase the fluff later.

Also, Erin suffered the first burn of this Bake Odyssey while helping with the skillet. It's been 6 months, not bad. It could have happened a lot sooner. Kitchen towels are an adequate substitute for pot holders but make sure they are dry and you have several layers between you and hot metal. Don't worry it was healed in a day.

The recipe called for 1/2 cup of blueberries but I wasn't using the little ones that you get with the box mixes. I had large fresh, organic blueberries so I piled them up just a little.

So when it came to dividing up the dough, it said to fill the cups 2/3 full and I thought I did. It said that it makes 12 muffins but i had more dough than that so I made 6 more. The result was small muffins. If I just divided it evenly among 12 cups, they would have been more muffin like but it turns out that our family liked them as is. Our cousin Bryan expressed some distaste for cakey muffins so they were a hit with him. I made a little honey butter to go with them and was happy with the result. 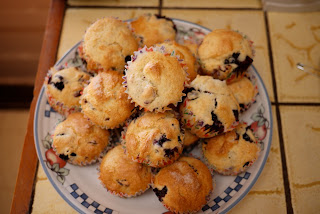 When we did our last challenge, we ended up making a third recipe together because we just couldn't help it.  So this time, we made Sausage Potato Quiche. We figure this would be a good balance to our breads.  We've heard that "real men don't eat quiche" but we figured that sausage and potatoes were definite man food so we took the risk. There is an amazing local butcher up near the house called Swingle Meat Company.  We stocked up for the whole weekend. If you are ever up there we highly recommend stopping in for beef jerky or one of their marinated tri-tips. This is their sausage.

Shredding the potato is really hard when you don't have the right tools (we only had a grater with tiny holes in it) so we really missed our food processor.  Especially since we doubled the recipe, that makes for a bunch of potatoes to shred. We cheated a bit after Sara's arm about fell off and chopped them up instead, with the help of our sister Kat.
The potatoes made up the bottom crust of the quiche. Then is was filled with the sausage, onion, cheese and the egg mixture.

In the end it was the Sausage Potato Quiche that won everyone over.  We have dubbed this quarterly challenge "Man Food and a Muffin."  Maybe that will be the title of our blog for 2011... 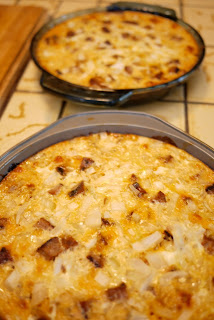 Lessons learned: Don't under estimate the power of good tools.  When making breakfast, Sausage or Bacon are your best bets.
Posted by Unknown at 11:03 AM