Our friends Jerome and Becky invited us to a Tequila Tasting Party. We've been to one before and it's a lot like a BBQ centered around the vast quality Tequila collection of these connoisseurs of the cactus concoction. They're the biggest foodies we know and we are honored to have their support of this blog.
So what do you bake for a tequila party? Well, upon googling tequila and baking, we were excited to find a recipe for Lemon Tequila Tres Leches Cake. We've been thinking about making Tres Leches Cake and this would be a great opportunity for it to be enjoyed by several people. It's perfect!

First a little history: Tres Leches Cake is very popular in Cental and South America. Many different countries claim its origin and have their own versions. It doesn't seem to be known exactly where it came from or when.  It is believed that the cake is of European influence and is a result of their similar soaked cakes, translated and transported, then fixed up with local ingredients. Canned milks are a product of the 19th century so it can't be older than that. Nestle has claimed popularization by printing the recipe on their cans of condensed milk around the time of WWII. This is a familiar concept, just think about your Nestle Toll House morsels. A lot of information to be found on this dessert is conjecture but one thing is for sure, its delicious. Here's where you can find out more.

This was going to be the perfect cake. We decided on the recipe because of the ingredients. There are no words to express how perfect they are for this party. Here's the list:
1 3/4 Cup All Purpose Flour
1/2 tspn Baking Soda
1/2 tspn Salt
1 cup Granulated Sugar
1/2 cup Tequila
3 lg Eggs
1 Vanilla bean scrapings
1 tspn Lemon Zest
3 tblspn Lemon Juice
1/2 cup Powdered Sugar
1 tspn Cream of Tartar

And that's just the cake. The ingredients are so exciting because 1)They have Tequila and that's perfect for this party, 2) Fresh lemon juice and zest are always a good thing, and 3) We've never used Vanilla bean scrapings before and its a perfect time to use them since Jerome was the one who gave us the ones we have in our stash of baking supplies.

The recipe comes from Cooks.com. We are not linking to it here because there are several flaws with it. We will explain here how we got ours to work and what went wrong with theirs. Here's how to make it and achieve success:
In a small-medium bowl, sift together salt, baking soda and flour. Set aside.
Separate your eggs yolks from your egg whites. We will use both but separately.
Combine the granulated sugar and the tequila.
Add the egg yolks to the tequila mixture and mix until the sugar is as dissolved as you can get it.
Add 1/3 of the flour mixture and mix till thoroughly combined. Add the next 1/3 and combine again, then finish it off.
Add the vanilla bean scrapings, lemon zest and juice and stir until combined.

The vanilla beans are new to us but we were up for the adventure. To do this, we cut he bean open length wise (we found it easier to do it in segments but it isn't necessary) and then run the knife along the inside of the bean. We ended up with a paste on the knife that when mixed in to the batter looked exactly like the black flecks in Vanilla Bean ice cream.

The batter isn't done yet and now it's time for the hard part... Egg whites!
We've run the gamut with Egg Whites on this blog. First there was the Angel Food Cake for Dad's Birthday where the eggs didn't quite puff up probably having to do with some rogue yolk that found its way in. Then there was the Souffle for Mother's Day when we over beat the egg whites. This time we were going to do it right. So, instead of using the mixer, we went with a whisk and some patience.
The egg whites were roughed up a little, then the powdered sugar and the cream of tartar were mixed in. We whipped it and whisked it for a good long while. We watched this to pass the time. This third time was indeed a charm.

This was then folded into the rest of the batter until it's all combined. 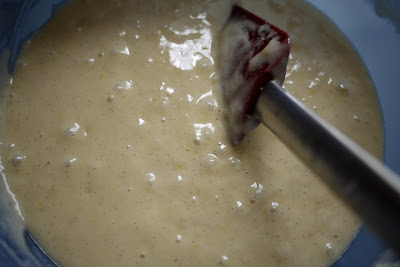 (Its a big pic so you can see the vanilla mmmmm)

This was our biggest contention with the cooks.com recipe. Aside from stating that the tequila, sugar and egg yolks should be beaten until fluffy (these things do not get fluffy), they recommend that the cake should be in the oven for 50-60 minutes. We found this to be way too long and didn't want to bring a browned cake to the party. We started all over again and found that 20 minutes was plenty of time. Here's the difference: 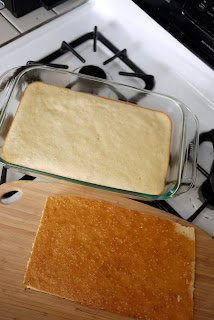 The darker cake looks acceptable on top but the bottom was not pretty. This happened after only 47 minutes. We wondered if maybe the cake should be cooked longer to become drier and soak up more of the milks but our 20 minute cake had no problem.  It tasted great and there were no complaints. If anyone knows better, please email us.
The milk mixture is easy:
1 cup Whole Milk
1 cup Condensed Milk
1 cup Evaporated Milk
We were nervous about the absorption so we poked holes in the cake. Not sure it was necessary but it didn't do any harm. The milk mixture was poured over top and it soaked in over a few hours. We left it refrigerated till serving and it was as we had hoped: perfect. 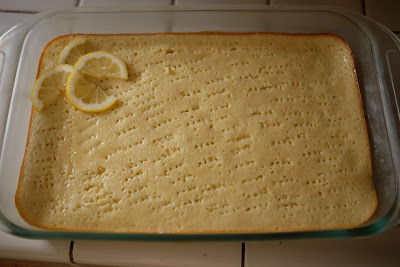 Lessons learned: Don't trust cooks.com or at least pick a recipe that had reviews. Also, if you're using a new recipe check on your cake frequently, not just near the end.

Email ThisBlogThis!Share to TwitterShare to FacebookShare to Pinterest
Labels: Cake