Soon after we started this blog, the LA Times had an article on a baked delicacy that sounded too good to be true. The famous restaurant Momofuku Milk Bar in NYC has a popular dessert called Crack Pie. There's no chocolate, no fruit, no meringue.  What could it be then that make this pie so good? What makes people willing to shell out $44/pie for this? This week, we set out to find out.
To begin with, there's an oatmeal cookie crust. To get there, we had to make the oatmeal cookie. This was easy and fine. The recipe calls for rolled oats, this is the same thing as old fashioned oatmeal so that's what we used.  It was fun to make one large cookie, let it cool and then break it up.

We put the cookie into the food processor with the butter, sugar and salt. We're familiar with this because we've made graham cracker crust like this before and it actually tastes very similar. Erin's new co-workers thought it was graham cracker. When it all gets chopped up in the food processor, it seems that the oatmeal bits get lost or pulverized anyway.

We didn't use all of the crumbs but it took a little effort and time to get it tamped down into the pie tin with a spoon. It does look pretty doesn't it? Here's where our experience and this pie diverge. Instead of baking the crust for a little bit, it gets put aside, no pre-baking the crust.

The filling was prepared next. We mixed all of the dry ingredients together first including the milk powder, an ingredient we used here for the first time. This stuff is a little weird in that there are some clumps a little bigger than the rest. We hoped that they would dissolve in the heavy cream, vanilla, melted butter and 8 eggs! It did pretty well.

This recipe makes two pies so we split the mixture between the two tins. It's very custard like in consistency and color. 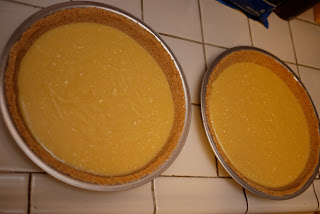 We baked them one at a time as the recipe instructed. The hard part here is that the gauge for when it's done is to see when it's barely jiggly. This calls for opening the oven and poking the side of the tin and visually measuring the seismic activity. Unfortunately this also means letting out the heat every time we tried to test it. This extended the heating time but quite a lot because we were still a little nervous about baking times after the Tres Leches Cake. We found that a better way to notice when it is done is when the filling just starts to bubble up. The LA Times noted that you'll be worried that your pie is undercooked but have faith, it's safe. 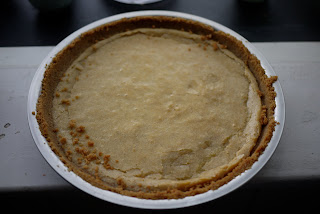 This is a picture of the pie after it had chilled overnight in the window sill in the morning light. They say to serve it chilled. Erin cut a piece out for Sara to have later and took the rest to work. She couldn't help but have a taste while cutting into it and felt the need for more shortly after. This pie is almost fictitiously delicious. Its very sweet but it has a slight saltiness to it that adds an intriguing dimension. It's true that it is not a pretty pie, nor is it for everyone. This pie, as with many baked goods is nowhere near the healthy side of the food spectrum but in moderation, it is way up there on the fantastic and scrumptious, perfect for a special occasion meter.
Here is the recipe:
btw Scant means a little less than. How much less than? We did not very much less than. Just don't use more than. Maybe the pies will turn into gremlins...
Oatmeal Cookie for the Crust
2/3 cup plus 1 tablespoon flour (we used a little less, it didn't seem to matter)
Scant 1/8 teaspoon baking powder
Scant 1/8 teaspoon baking soda
1/4 teaspoon salt
1/2 cup (1 stick) softened butter
1/3 cup light brown sugar
3 tablespoons sugar
1 egg
Scant 1 cup old fashioned oatmeal

Preheat to 375.
Sift together the flour, salt, and baking powder, set aside.
Beat the butter, brown sugar and sugar until light and fluffy.
Whisk in an egg until it's all mixed in.
Mix in the flour mixture. Do so in 3 parts, fully mixing it in each time.
Add the oats and fully combine it all.
Spread it onto a 9 x 13 baking sheet or pan. Bake until just brown and set. This should take about 20 minutes.
Let it cool and then crumble it up for the crust.

The Crust
To make the crust, we were sure to have the butter at room temperature for easier incorporation.
1/4 cup (1/2 stick) butter
1 1/2 tablespoons  brown sugar
1/8 teaspoon salt
We threw it all into the food processor with the cookie crumbles and turn it on. It worked fine. Spoon the crust into the tins and press it in. Set them aside.
The Filling
1 1/2 cups sugar
3/4 cup plus a scant 3 tablespoons  light brown sugar
1/4 teaspoon salt
1/3 cup plus 1 teaspoon  milk powder
1 cup (2 sticks) butter, melted
3/4 cup plus a scant 2 tablespoons heavy cream
1 teaspoon vanilla extract
8 egg yolks
2 prepared crusts
Powdered sugar, garnish

Preheat the oven to 350.
Mix up all of the dry ingredients.
Then, whisk in all of the wet ingredients but leave the egg yolks for last.
The egg yolks need to be gently whisked in. You want it just mixed but with very little added air.
Now, divide the mixture between the two crusts and bake one at a time.
350 degrees for 15 minutes then reduce the temperature to 325 and bake till slightly jiggly. They say 10 minutes but we found it closer to 15. Just keep an eye on it till it starts to bubble, then check for jiggly-ness.
The pie should be served cold and you can garnish with powdered sugar though we didn't find it necessary.
Lessons learned: Believe it or not, we learned what a scant was. In these 6 and a half months, we hadn't come across that in a recipe. We also think we'll try to mortar and pestle the milk powder next time just for easier incorporation. We are also curious about what would happen if we baked the crust for a little bit before the pie. Maybe it wouldn't stick to the pan so badly...
Posted by Unknown at 10:02 PM