Some of you may have looked at our last two posts and thought "10/31, 11/13? Hey, that's 2 weeks between there. They skipped a week!" Well, we didn't skip a week. I (Erin) baked a pumpkin pie but I've been a little busy and to be honest, I was a little too disappointed in it to tell you about it.

You see, Sara was on vacation with our Mom and so I flew this one solo. That's no big deal but I wanted to have something for them to enjoy when they got home and so with a suggestion from my husband, I decided on Pumpkin Pie.

Now, I've never made a pumpkin pie before. I've made pumpkin cheesecakes (and yes Candice, I will get to making some of those very soon. Tis the season,) but not a pumpkin pie. I knew that the best resource that I had was my Cook's Illustrated Family Cook Book. These are recipes that we can't post but after completing it, and tasting it, there are some changes I'd make.

So begins my pumpkin pie inspiration: This is the season for pumpkin pie. I'm very excited that it's here. I love pumpkin everything and my friends love the pumpkin cheesecakes. I even tried to grow pumpkin in the back yard this year, but due to a complete lack of knowledge of what I was doing, the pumpkin plant remains in a state of limbo where it hasn't died nor has it thrived...or produced.  I keep thinking "well, November isn't over yet...maybe something will happen." But I need to really start changing that thinking to "maybe next year..." For now, there are plenty of canned pumpkin reserves available to me at the grocery store.

This pumpkin pie recipe seemed a little challenging but I was open to the experience. I made my own crust, similarly to what we've done before.

I learned that heating up the filling before pouring it into a hot pie crust helps to make it creamy and consistent.

Everything was going well. I baked it for a few minutes longer than suggested. Mom and Dad's oven is usually spot on with the lower range of suggested cooking times but I gave it a little longer to achieve that "cracking edges, jiggly in the middle" description.


I let the pie cool so we could enjoy it. It was still a little warm but I couldn't wait any longer. You know how the first piece of a pie is always the messiest, some would say "worst" piece? Well, this one was a doozy. I went to cut into it and found that there wasn't much cutting to be done. Scooping if anything. The pie was nowhere near solid and I was sad.

I decided to reheat the oven and stick it back in. I ended up baking it for the same amount of time in order to reheat the filling and to get the pie cooking again. That worked but I'm left unsure as to how long I should bake the pie when I only want to bake it once.

As for the taste of the twice baked pumpkin pie, it was decent. I did enjoy it, though I thought there may have been too much or too many spices. It called for ginger (I used ground ginger because I can't imagine what else they meant), cinnamon, and ground cloves. It was a little much. I think I would have liked to let a little more pumpkin flavor shine through. Yes, shine. I love pumpkin. 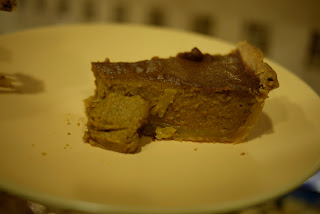 Lessons learned: Bake the pie for longer, stick a toothpick in it even if the recipe doesn't say so. "Jiggly in the middle" is not a good indicator of "done-ness. I definitely want to try this again with a few tweaks.
Posted by Unknown at 7:37 AM