Our friend Kate's birthday falls on Halloween. It was a double whammy holiday that we had to bake something for. We've already made halloween cookies so, we decided to do something a little more Kate specific. She was having a party to celebrate both so we knew that the treats would be enjoyed. We toyed with the idea of cupcakes but then settled on Cake Pops. We had a few ideas of our own but after secretly talking to Kate's boyfriend Dennis, we had a clear vision of what to do: One Piece cake pops. 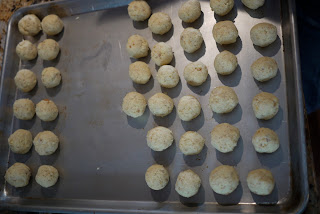 Now, we'll be honest here. We had no idea what "One Piece" is before talking to Dennis. We knew about some of Kate's interests including anime but were unaware that her favorite show is "One Piece" and that it is a pretty popular show. This made it lots easier doing research cause there's info all over the internet for it. 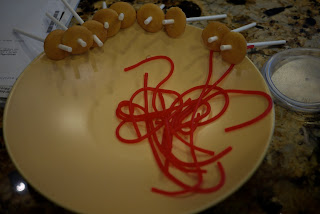 Dennis told us that making a straw hat would be perfect for Kate. It's the hat that the main character, Luffy wears as he leads the straw hat pirates.

During our research, we came across another character called Tony Tony Chopper. He looks very cute and seems quite popular throughout the net. His hat is quite distinctive and we thought that it would be a good pairing with Luffy's. 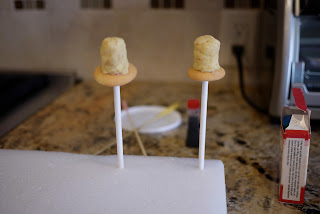 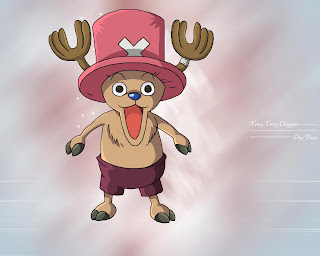 We decided to use Nilla wafers for the base of the hats. This worked out pretty well. We drilled a hole in the center of each wafer with a wooden BBQ skewer. We were happy to find out that most wafers stayed intact with a delicate touch. :o)
Luffy's hat is round while Chopper's is tall. We molded them accordingly and then dipped them in their candy melts. 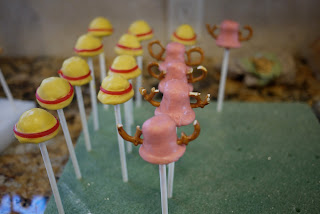 Luffy's was yellow with a red twizzler ribbon around the base. Chopper's was pink, with a little bit of red food coloring added to enhance the color with pretzels attached for the antlers. 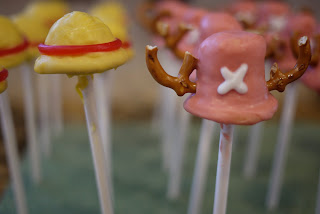 Cake pops are a lot of work. Bakerella, the cake pop Queen says to allow a few hours to make them. It took every bit of that few hours and there were 2 of us working on them. We'd say they're every bit worth it though. We thought they came out great. Kate really liked them, both look and taste. We'd do it again if we had the chance. 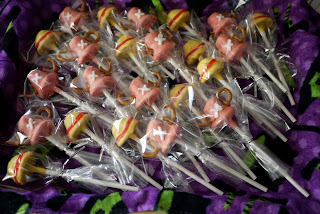 Lessons learned: Vegetable shortening helps so much when it comes to making candy melts workable. Couldn't have done this without it. Also, Erin is good at melting the candy, Sara is good at applying it. We make a great team, not that we didn't know that already.