Being that we were going to be enjoying the Superbowl in a Saints household, we decided to contribute to the southern cuisine with a dessert of bread pudding. We thought it would be a nice finish to the pulled pork sandwiches and red beans and rice. 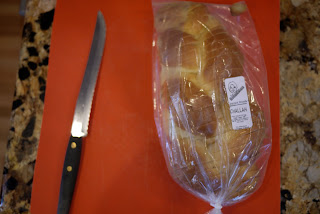 We decided not to put too much pressure on ourselves by baking the bread and then turning it into pudding so we went to the farmer's market and picked up a loaf of Challah from The Bread Man. We were following a Cooks Illustrated recipe again this week and they say that Challah is the best for flavor and absorption. We bought the pre-sliced loaf though the recipe calls for larger cubes. We don't think it made a difference. 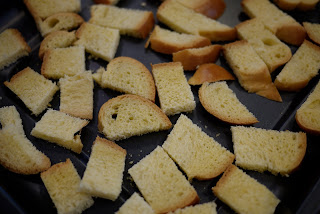 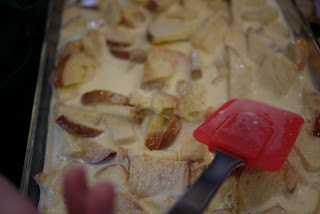 We cut up the bread into small pieces and put them in the toaster to dry out but not brown.
Then the pudding mix got whipped up and combined with most but not all of the bread. The bread was coated and then left to soak.
Then the rest of the bread was placed on top with a pecan/brown sugar mixture to add some crunchiness, and then into the oven it went.
Unfortunately, the pulled pork that was in the oven just before our bread pudding had left some charred juices at the bottom. This provided a billowing smoke inside the oven but we didn't have time to fix it. By the time we realized there was a problem with the oven, we had already begun soaking the bread in the pudding mixture. We wiped out as much as we could and then we went for it. 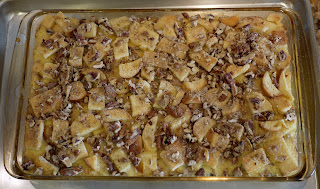 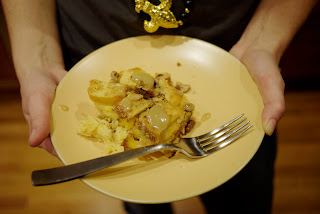 All reactions were positive. There was a guest at the party that loves bread pudding and she said that she was not disappointed. We probably only found a very slight smoky flavor because we were looking for it. But overall, it was a fun new challenge and addition to our baking repertoire.
Lessons learned (slash reiterated): Start with a clean oven. We knew this, but didn't have much choice in this case.
Posted by Erin and Sara Morris at 8:03 PM