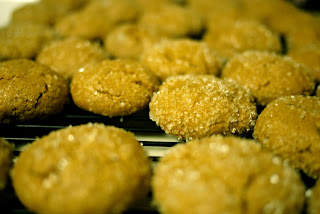 Baked goods bring joy and friendliness. As I walked into my office I was greeted by a co-worker with a "Good Morning! How are you?" Later she admitted that she was talking to the cookies.

This recipe is for the Double Ginger Snaps from Williams Sonoma. We chose it because it uses both ground ginger and chopped candied ginger. We like ginger. There's a recipe for making your own candied ginger at home but we didn't have that kind of time as most people don't.
Guess we're amassing quite a collection of baking ingredients as all we needed was the candied ginger and the white sugar crystals. We found both at Bristol Farms.
The recipe says it makes 4 dozen. We ended up with a little less than 3 dozen. This seems to happen a lot... It could be for the best though. These cookies came out not so snappy as soft and most co-workers/tasters liked that.
Lesson learned: Smaller dough balls will probably make crunchier cookies.
Posted by Unknown at 7:44 PM