Last week, we made a traditional type of meat pie from England. This week we went with something a lot more familiar though we've never made it before: Apple Pie.
***We can't post the recipe this week so this entry is mostly about tips for making an apple pie with whichever recipe you choose.
We looked through a bunch of different recipes. There were some with just cinnamon, some with cinnamon and all spice, or cinnamon and nutmeg. We went with the recipe that had all three! We have yet to go wrong with using too much of these spices. Of course we stick mostly to the recipe but a little extra flavor never hurts ;o)
Most pies are made with Granny Smith apples but we know that they can be pretty tart. Based on a recommendation from a friend, we also supplemented the Granny Smith with Red Delicious from the organic apple dude at the Farmers Market. 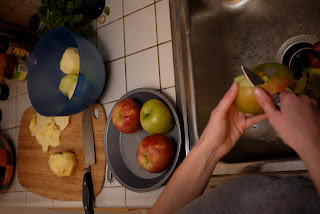 Since we've never made apple pie before, another friend who has came to help supervise. He suggested that we went with both butter and vegetable shortening instead of only one or the other. We mixed them together with the flour, salt and sugar using our food processor. 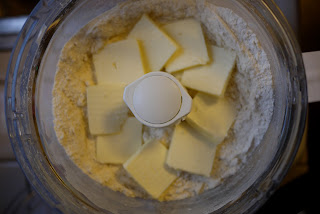 The dough was then chilled while we went about making the filling. 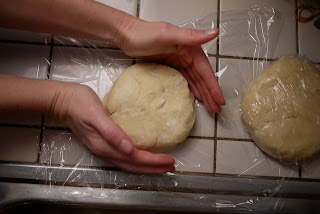 Oh, the filling! The yummy yummy filling. The sliced apples were mixed together with sugar, the spices, lemon juice, lemon zest and a little bit of flour. Is it wrong that Erin licked her hands when she was done? 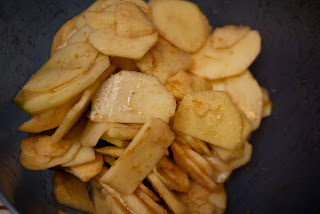 The dough was then rolled out, put in the pans and placed in fridge again for 20 mins. The filling was inserted, the top crust rolled out. We had to embellish the crust with cookie cutter holes instead of the usual slits. It's just too cute. We were also excited to use a particular pie dish given to Erin by our cousins Katie and Bryan. It's in the shape of an apple! We have to admit, it was the inspiration for the item choice this week. Wouldn't you want to use it too? 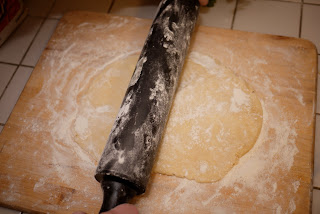 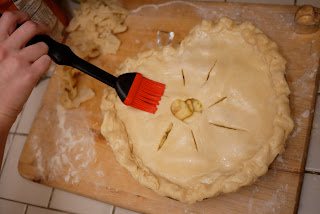 We made 2 pies because we've had a lot of requests lately from taste testers. The pies were glazed with beaten egg whites and dusted with sugar, then placed in the bottom rack of the oven. We placed them on baking sheets to catch the juices. The baking sheets were in the oven during the pre-heat so they could transfer the heat to the pie pans instead of obstructing it. 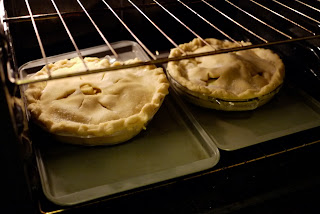 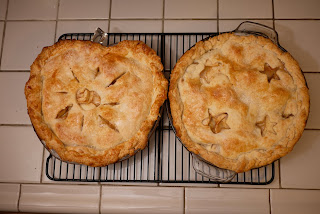 As you can see, the pies came out beautifully. We had a hard time keeping the boys away from them while they cooled. Tim kept using his food thermometer on them to check when they would be cooled enough. As good as they looked, they tasted even better. The spices and consistency were perfect. Our supervisor even conceded that his had never come out this well before. It was a great night.
Lessons learned: We should make pie more often. Also, we need a little practice at making the edges look pretty. Not too bad!
p.s. Here's a pretty picture and thank you to Katie and Bryan. We love you guys! 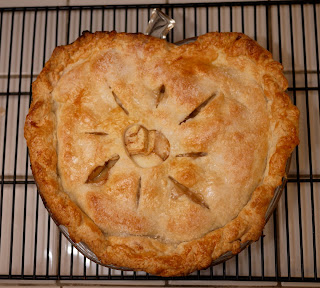