Not that we're tired of sweets but we felt it was time for a change. And, there is more that you can bake than desserts and treats. So, we decided that this week, we would make a main course for our usual Sunday Family dinner.

We chose Cornish Pasties. We've had this idea all week. We just chose to execute at the end of the week. People that asked what we're baking this week were told "Cornish Pasties." We were met with looks of confusion and some slight smirks. Stateside, it's not so common. So here's a little history:
Cornish pasties are from Cornwall, England. They are a traditional miner's lunch. It is a pie crust type dough filled with beef, potato, carrots and onions. The miners would mark these "hot pocket" like meals with their initials so they would eat half for breakfast and know who's was who's for lunch. In fact the fillings were usually so hot that they were still warm for meal time. These days, it's a quick takeaway food that people on the go pick up at groceries all over England.
For us, this was a collaborative effort. Tim, Erin's husband/Sara's brother-in-law made the "insides" and we were responsible for the crispy crust. Tim used all the above mentioned ingredients as well as some turnip and seasoned with Salt and Thyme. We couldn't tell you how much to use because we had a TON leftover. Here's the recipe for the dough:
1.5 cups of flour (we prefer unbleached)
1/4 teaspoon of salt
3/4 cup of margarine
Combine and knead together. Add small amounts of water until you have a stiff dough.
This yields enough dough for about 3 pasties. Roll it out into rounds with a floured rolling pin and remember to coat both sides of the dough with some flour so that it isn't sticky.
We liked the walls of the pasty to be thick. What makes the Cornish Pasty different from other traditional English pies is that it's all baked together. You don't brown or cook the meat before it is all wrapped up. This is why it is important to bake the whole thing thoroughly. 20mins at 425, then 40mins at 325. 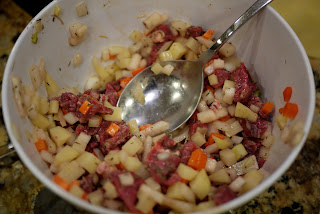 The edges were brushed with whipped egg to help it stick. 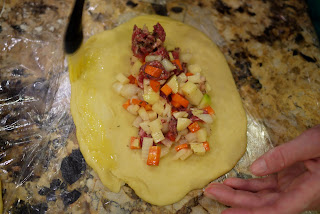 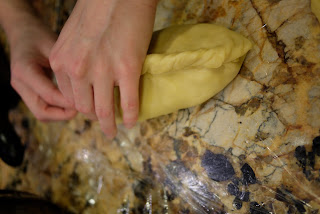 We left a hole for steam to get through and pinched in some initials for authenticity. D for Dad. :o) 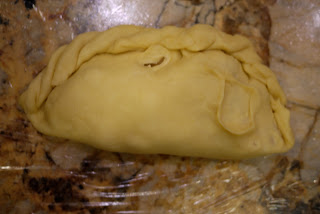 We then brushed the tops with some of the beaten egg and put them in the oven. 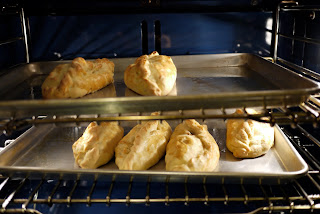 We were very happy with how they came out. The flavors were great and it really wasn't hard to make. We would do it again for sure. We did discover that they are incredibly filling and we understood how a hungry miner could eat only half and save some for later. 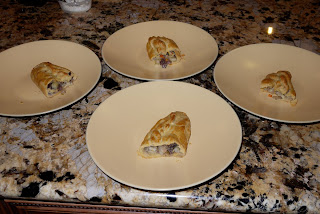 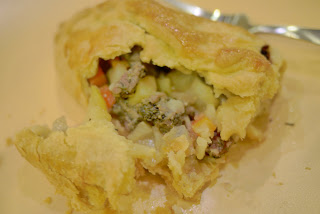 Lessons learned: If we wanted to put our initials in again, we would use scraps of dough. They didn't come out so well with the pinching technique. Also, make less of the stuffing part. We had a lot left!
Posted by Unknown at 7:56 PM