We've been thinking about doing Pot Pie for a while.  Well, the time has come. The Pot Pie that we are most familiar with is Chicken Pot Pie from Marie Callendar's. This savory salty meal was one of our favorite microwave meals growing up. This time we did it for real and this time it was a bit healthier with loads of vegetables.
We decided to do Veggie Pot Pie because I (Erin) am a vegetarian during the week. To most people this sounds very odd. I make a few exceptions during the week but for the most part, I stick to it. You'll notice that the few meat dishes on this blog were made on weekends. I do it because it lowered my cholesterol by about 60 points. I've stuck to it for over 2 years now and I am very pleased with how I feel. I have a hard time with the idea of giving it up completely. The rest of my family, as with most Americans have a very meat based diet. We get together mostly on weekends and then my dietary differences aren't a problem. It's a great diet for me but not every diet works for everyone when it comes to lowering cholesterol. There are studies out there that state that diet doesn't have much effect on cholesterol but I found that it worked for me. As long as you're making sure you still get your protein, I would consider it a part of a healthy and green lifestyle.
Now on to the Pot Pie. Sara researched the recipes while I was at Jury Duty and then sent them to me via email. I knew from the Apple Pie and the Cornish Pasties that the dough would need to be chilled. So I only opened that recipe and made it before Sara got home. This did not work out so well...

I didn't realize that the filling was for a lot more crust than I made. Oops! To be fair, Allrecipes.com did not explain this issue either. The dough recipe should have been doubled and that was not noted. Problem solving explained later. Here's what it should have been.
4 Cups all-purpose flour
1 1/2 tspn salt
1 1/3 cup of shortening
12 tblspn cold water
All that went into the food processor. I kneaded it a little and then split it in 2, wrapped it in saran wrap and refrigerated it.
Then came the vegetables. 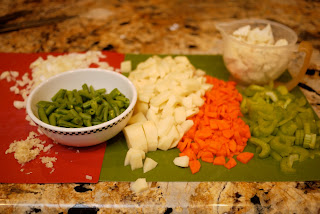 I happen to not like mushrooms so we omitted those and added another stalk of celery and some more green beans. Our version of the recipe ingredients is:
2 tblspn of olive oil (for frying up the onion and garlic, then veggies)
1 onion, chopped
2 cloves of garlic (instead of 1)
2 large carrots, diced
2 potatoes, peeled and diced
3 stalks of celery (instead of 2)
2 cups cauliflower florets
1 1/2 cup fresh green beans, trimmed and snapped into 1/2 inch pieces
salt and pepper to taste
3 cups vegetable broth
2 tblspn cornstarch
2 tblspn soy sauce
1 tblspn thyme

The oven was preheated to 425 and then we got to chopping. It seems like a lot of chopping but it wasn't so bad, especially since there are two of us.  If you don't want to chop, you can always break out the food processor.
We mixed together the soy sauce, cornstarch and a 1/4 cup of water.
The olive oil went into a large skillet and then we cooked the onions and garlic for about 3-5 minutes.  Then, the rest of the veggies went in along with vegetable broth.
In went the cornstarch mixture. We then sprinkled on a layer of salt, a layer of pepper and a layer of thyme. Mixed that all in and brought it to a boil, turned down to a simmer and let it all cook till the vegetables were just tender. 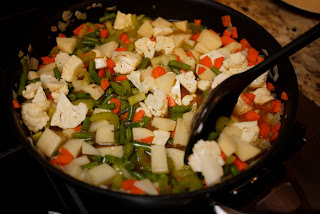 The dough was rolled out and that's when we discovered that there wasn't enough of it. There was supposed to be enough to line and cover an 7 x 11 baking dish but we couldn't see it stretching that far especially since we only have an 8 x 13. We didn't have time to make more because of the time needed to chill it so, we improvised. We brought out a 9 x 9 baking dish and used that instead. 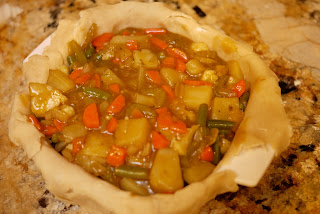 We had a lot of "insides" left over so we cooked up a cup of rice to eat it with. We had enough to go around of the actual pot pie so we had the "insides" for lunch the next day but there went another one of our baking mishaps...survived. 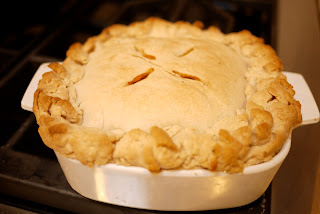 We found it to be a very yummy and filling dinner. Next time, we'll either double the dough part of halve the veggies but at least no food was wasted this time. We feel that it makes a good vegetarian dish and meat isn't missed. But because we used vegetable shortening, dare I say that it is a vegan dish? 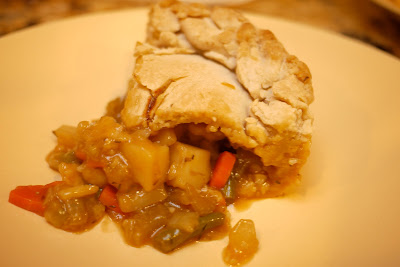 Lessons learned: The first time you make a recipe, there's going to be something to learn. Since that's all we do on this blog, there's lots of things we'd do better next time. Maybe that's an idea for next year...
Posted by Unknown at 2:42 PM