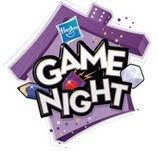 Sara and I were lucky enough to host a Hasbro Game night through a website called House Party. We signed up and they sent us the new edition of Trivial Pursuit before it's available in stores. They also sent Taboo, Electronic catch phrase and a whole bunch of crackers. We were most excited about the TP game called Trivial Pursuit: Bet You Know It. What's neat about this game is that you can bet on the other players, whether they'll get it right or wrong. Then, you can use those points to buy a piece of the pie or help you in the final round. It makes it a lot of fun.  This is where we got the inspiration for this week's baking project.
Hasbro calls it a wedge, we (and everyone else we know) calls it a piece of the pie. So, we made pie. This time it's cherry pie. We couldn't decide which kind to make though. The latest issue of cook's illustrated has a recipe for Sweet Cherry Pie (WARNING: you may get that Poison song stuck in your head) but we also had 2 jars of Morello Cherries which we understand can be hard to find but are the best for making Traditional Cherry Pie. So, we made both.

We wanted to try the Cook's Illustrated Pie crust recipe because it had vodka in it and we found that interesting. We don't think we'll ever make it again though because it was a real pain. Make the dough, refrigerate it, put it in the pie tins, refrigerate it, put the filling in, freeze it, then finally bake it. It was good but we wouldn't say that it was worth all the extra effort.
The filling however was a different matter. It came out quite thick and appealing. 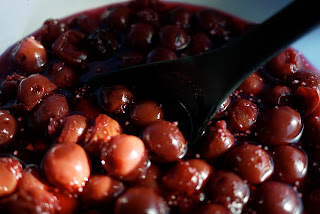 We used thawed frozen sweet cherries. CI had a specific brand in mind but we only found one kind at the store and this wasn't it. They were just fine.  Their recipe also called for a little bit of bourbon and that was exciting as well. Both fillings called for tapioca but CI's was ground first...don't know what difference it makes.
The recipe for the Traditional Cherry Pie was from Foodnetwork.com Here are the ingredients: 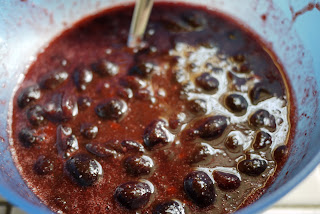 Mix it all together and it's done. This is very simple but as you can see from the picture, it's also very juicy. We found it a bit worrisome.
Here are the pies with the crust: 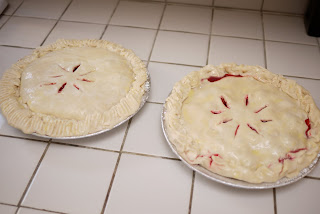 (Left is the CI Sweet Cherry, Right is the FN Classic Cherry)

You can see that the Food Network pie is overflowing with juices but the Cook's Illustrated pie is perfectly set. We would have to see if they survive the oven but first decorations! 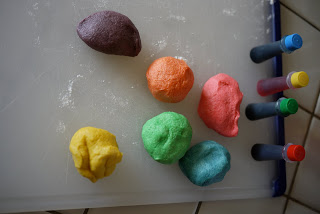 We took leftover pie crust dough and dyed it to correspond with the wedge pieces in the new trivial pursuit game. The plan was to lay it over the crust as big pie pieces but the dough wasn't cooperating after being handled so much in the dyeing process so we scaled it down to game piece size. 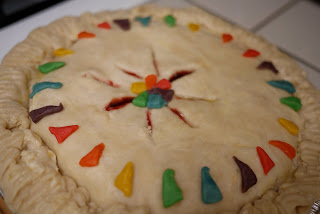 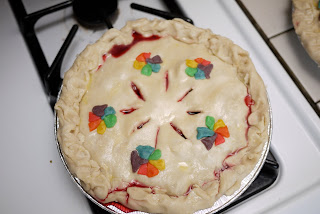 We we proud of our artwork so into the heat they went. 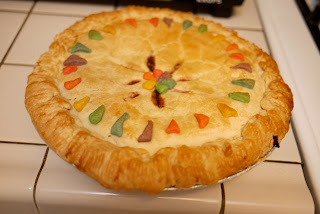 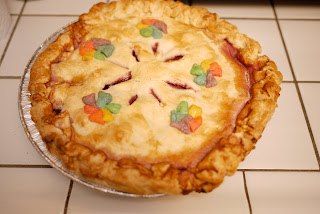 The Classic Cherry survived as well.
Everyone at the party had small pieces of both to tell us which they liked the best. We were a bit surprised by the results. It seems that although the sweet cherry filling was appreciated, it was unexpected. It seems that out board gamers were more accustomed to the classic cherry flavor and happy to have enjoyed a pie that was of quality and that they were used to. We'd make it again.

Lessons learned: You shouldn't mess with the classics. Also, if your oven is enough for 2 pies, but your baking sheet (to catch the drippings) isn't, try 2 baking sheets. Otherwise you may end up like a mess like us.