It hasn't been the warmest of summers here in So. Cal, so home gardens haven't been doing too well but someone we know still managed to grow this huge zucchini. 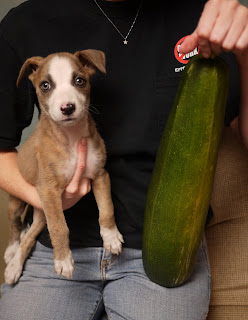 Look, it is bigger than Genoa Puppy!

Zucchini is a vegetable that is pretty near and dear to our hearts.  Our Grandpa was a very successful gardener, some might say too successful, because every summer when we would visit there would be lots and lots of zucchini.  So our Grandma made zucchini bread, zucchini soup, zucchini pancakes and a cheesy like lasagna(but she used zucchini instead of noodles).  When I(Sara) saw this huge zucchini I thought of that dish she would make for us.  So I looked around on the Food Network site and found this recipe from Giada De Laurentiis.  She calls it Verdure al Forno which translates into "Baked Vegetables". 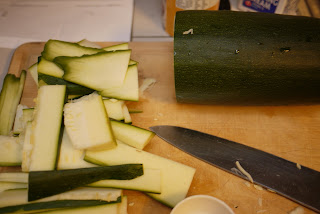 This recipe calls for three different kind of white cheeses.  All yummy on their own and super good together.

Because this was a form of cooking and we weren't super strict on the measuring.  We made sure there was lots of cheese and lots of bread crumbs. 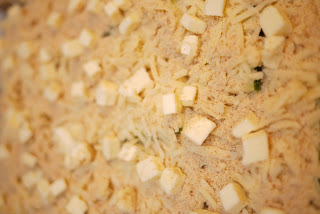 It came out really yummy and much like the recipe our Grandma made, although I think she might have used Italian Bread Crumbs, which would probably be worth a try cause that will kick up the flavors a bit. 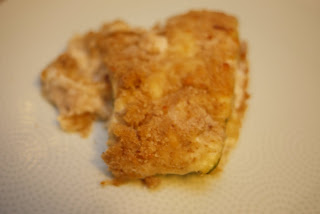 We even had enough zucchini left over to make zucchini bread from the Cooks Illustrated recipe.  We made it with dried cranberries and nutmeg.  We highly recommend trying it.

Lessons learned: Italian bread crumbs could make it taste even better.  Big produce can be used in multiple dishes, I guess that is why we always had so many growing up.
Posted by Unknown at 9:45 PM

Email ThisBlogThis!Share to TwitterShare to FacebookShare to Pinterest
Labels: Dinner