We've been doing a lot of baking this year but nothing compared to Sara's best friend Briana, who has had a different kind of bun in the oven. To celebrate the birth of Briana and Brian's baby boy Beckett, we baked banana bread. Too much alliteration? Too bad, too late.

We had a lot of fun with this one (if you couldn't tell already.) There's a lot of fun to be had with bananas. 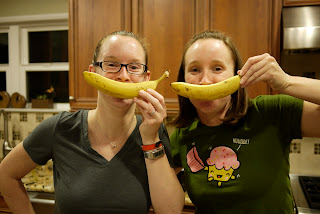 It can also be dangerous though, so you should always be careful with them. 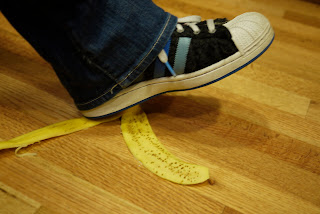 We chose the recipe from the joyofbaking.com website because we've liked other recipes from there. We did omit the nuts though cause we're already going bananas with the bananas, we don't know what would happen with the nuts. 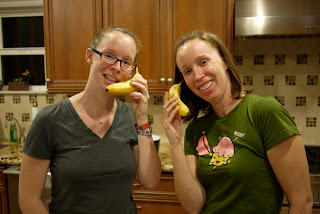 We mashed the bananas and that was perfect cause it ended up looking like baby food, not that Beckett could eat it. Its the same dilemma as with Oliver's Cupcakes but at least the new parents will be able to appreciate it. 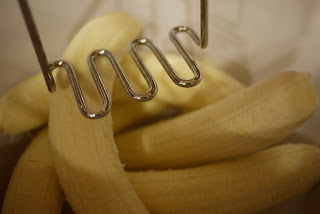 The wet ingredients mixed with the dry ingredients and you can't tell from this picture, but they smelled really good. Imagine vanilla, cinnamon and banana. That doesn't sound great, but it is. 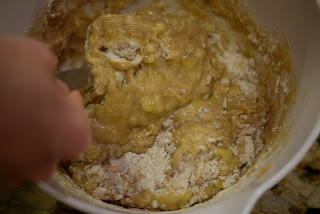 We made 2 so that we could taste one and freeze the other, then FedEx it off to the newly enlarged family. Gotta taste it. It's very important. 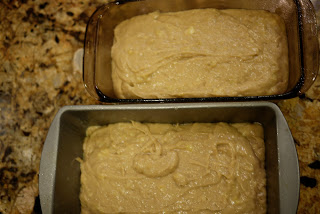 As you can see, we used one glass dish and one metal one. This would have been a good experiment in seeing the difference if one wasn't slightly bigger than the other. The metal one did take longer to bake but they both came out great. 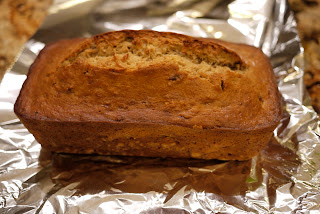 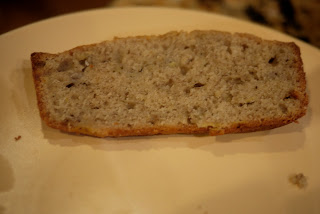 Lessons learned: This was easy and fun. We gotta bake with fruit more often. We will get it eventually. :o)
Posted by Unknown at 10:43 AM

Email ThisBlogThis!Share to TwitterShare to FacebookShare to Pinterest
Labels: Bread